This collection of poems celebrates the lives and achievements of one of the most successful race of people in human history - the Ancient Romans.

Here you will find a poems about Julius Caesar, Hadrian's Wall, Anthony and Cleopatra, and many other famous Romans. Written by Paul Perro between 2008 and 2015, the poems are fun and easy to read, but they are historically accurate, so you might also learn a thing or two as well.

Note some of these poems contain subject matter that might not be suitable for very young children.

When you have finished enjoying the poems, please scroll down a little further for more interesting facts about Ancient Rome and the Romans.

The Romans used to rule the world
A long long time ago.
They came from Rome in Italy
And spoke Latin, don’t you know.

They were a great civilization
But also, as we shall see,
Roman rule could be harsh and cruel
Let’s find out more, shall we? 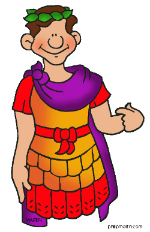 You'll often hear about him in
A book, movie, or ballad.
He's the most famous Roman.
He even has a salad!

Yes, Caesar was a great man, but
He met a nasty end.
Stabbed, on the Ides of March,
In the back by a friend. 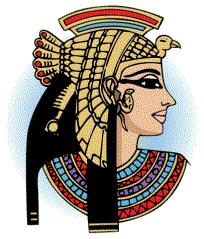 Mark Antony was Caesar’s loyal friend
And he did avenge the great man’s slaughter.
Then he fell in love with Cleopatra
The queen who bathed in milk (not water).

Octavian had a bossy wife,
And he always tried to please her.
He made himself the emperor
And changed his name to Caesar

The Emperor Caligula -
He made a consul of his horse.
Historians have always said
He was quite mad, of course.

Claudius was a funny chap.
He limped and had a stammer,
But his wisdom made up for
What he lacked in glamour.

Emperor Nero liked music;
He liked to play the lyre.
One day while he was fiddling
Rome itself caught fire.
Nero was a terrible man -
He murdered his own step-brother.
He also chopped his wife’s head off
And poisoned his own mother.

Hadrian
The Romans had some enemies
There were thieves and vandals about.
So Hadrian built a wall
To keep the rotters out.

So now you’ve heard a little
About some folk from Rome.
There are so many many more,
Too many for this poem

Here are some more poems about Ancient Rome that you might enjoy:

The Destruction of Pompeii
The story of the worst natural disaster of the ancient world.

Hannibal
Hannibal led an army (including war elephants!) across mountain to attack the Romans in Italy itself.

Spartacus
This poem tells the story of an escaped gladiator called Spartacus, who led an army of slaves, who fought bravely against their former masters, the Romans.

Boudicca, the Warrior Queen
One of the most fearsome women ever, she fought against the Romans to defend her family honour.

The Fall of Rome
by Paul Perro

The Mighty Roman Empire
For centuries all was well;
But nothing lasts for ever, and
Eventually it fell.

It had faced many big problems,
Like political corruption,
Slaves revolts, mad emperors,
The Vesuvius eruption.

They also suffered greatly with
Economic instability –
Lack of money caused by the
Tax-dodging nobility.

The biggest problem though, was
Invaders from abroad
Goths, Huns and Vandals
Made up the barbarian horde,

The Empire fell for good when
Rome was attacked by Vandals.
That was the end of the Empire
Of Latin, togas and sandals.

Facts about Ancient Rome for Kids