Here's a fun collection of poems for kids about famous pirates, by Paul Perro - true stories about some of the most notorious villains ever to sail the seven seas.

You might be familiar with the dreaded Blackbeard, but have you heard of Black Bart, perhaps the most successful pirate ever? What about the hapless Henry Morgan, who had a habit of sinking his own ships?

Did you know there were women pirates too? Anne Bonney and Mary Read were the most famous - they were tougher than the men.

And what about Francis Drake? Some people think of his as a great military leader (he defeated the Spanish Armada) but the truth is he was actually a pirate as well.

We hope you enjoy these poems, and please check out the Pirate Facts too (scroll to bottom of page).

There's Long John Silver, Captain Hook,
And Captain Jack Sparrow,
But these pirates are just made up,
They are not real you know!

There were a lot of real pirates
Attacking ships at sea,
We'll learn about them in this poem,
So let's read on, shall we?

Blackbeard
His name was really Edward Teach
But folks called him "Blackbeard".
He captained "The Queen Anne's Revenge"
And he was greatly feared.

To make himself look scary
He tied plaits in his hair,
So from a distance it looked like
Some snakes were living there.

Nicholas Brown
Pirate Nicholas Brown was caught
And threatened with the chop,
But he was given one last chance
Because he said he'd stop.

But he went back to his old ways,
Went back to being a pirate.
I guess he had a stubborn streak,
Perhaps we should admire it?

And one day, Brown was caught again
This time it was the end.
Yes, caught and killed by John Drudge, who
Once used to be his friend.

He did not drink a lot of rum,
Preferring to drink tea.
Perhaps the reason he did well
Was his sobriety.

Captain Morgan
Sir Henry Morgan wasn't the
Greatest pirate ever.
One time he crashed his ship on rocks,
Which wasn't very clever.

Francis Drake
To English folk, Sir Francis Drake's
A hero, brave and bold.
But Spaniards call him "pirate" -
A thief who stole their gold.

Sometimes history books tell us that
Women were soft back then,
But Anne Bonney and Mary Read
Were tougher than the men.

And there were many many more,
Too many to tell you.
And so, me hearties, now's the end,
Avast ye, and heave to. 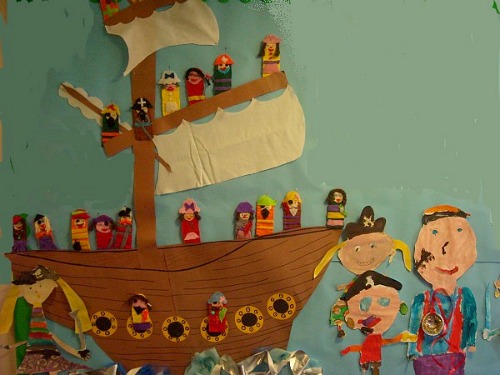 How to make a Pirate Cake