When people say "The Middle Ages" they usually mean the time period from when the Romans left Britain, to when the Tudors came to power (or perhaps to when Christopher Columbus discovered America, which was about the same time).

These funny and educational poems about people and events from the middle ages make excellent bedtime stories for young children, or fun poems for older children.

You will know some of the stories, but here, for the first time, they are told in the form of story poems for kids.

Poems about the Middle Ages

A History of Vikings
Learn who the vikings were and what they did. Find out about Eric the Red, Lief the Lucky, Odin, Thor, and Ragnar Harybreeches.

The Story of Lady Godiva
A poem about Lady Godiva's famous ride, naked, on horseback, around the streets of Coventry.

King Canute
The viking king Canute (or Cnut) is remembered for his doomed attempt to stop the tide from coming in. 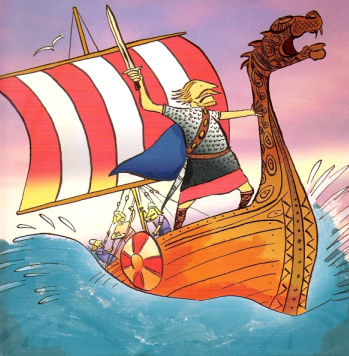 All story poems on history-for-kids are funny, educational, and best of all, free!

As a parent or teacher you may copy or print out any of the poems/stories and pictures, and read them to your little ones without having to ask permission. Please, however, do not use the poems for any commercial purpose (such as magazines, newspapers, or websites) without contacting us first.

Facts About the Middle Ages

Back Home from The Middle Ages