You will know some of these stories from myths and legends, but here, for the first time, they are told in the form of children's bedtime story poems.

All story poems on history-for-kids are funny, educational, and best of all, free! As a parent or teacher you may copy or print out any of these poems/stories and pictures about myths for children, and read them to your little ones without having to ask permission. Please, however, do not use the poems for any commercial purpose (such as magazines, newspapers, or websites) without contacting us first.

Myths and Legends Poems for Kids

Ancient Greek Gods and Godesses
A collection of poems about the ancient Greek gods who lived on Mount Olympus.


The Myth of the Minotaur
The hero Theseus battles the minotaur - a giant with a bull's head, locked up in a labyrinth in Crete.


Perseus and Medusa
Perseus was sent on a quest to slay the monstrous Medusa, who had snakes for hair, and could turn her enemies to stone just by looking at them.


Prometheus
Prometheus stole fire from the gods and gave it to mankind.


Icarus
The story of the boy who flew too near to the sun.


Jason and the Argonauts
Jason and the crew of the Argos set out on an epic quest to find the golden fleece, and claim it for their king.


The Wooden Horse of Troy
After the siege of Troy had been going on for many years, the Greeks tricked the Trojans using a giant wooden horse.


King Midas
A good king, but a foolish one. King Midas makes a wish, one that he soon comes to regret.


Pandora's Box
The story of the first woman, and the mysterious locked box that must never be opened.


Romulus and Remus
The legend of the two brothers, rescued from drowning by a wolf, who grew up to be the founders of the city of Rome.


The Lambton Worm
An ancient British legend about a worm that grew into a dragon, and terrorized northern England, until a hero came to fight it.


Willy Wilcox, Blue Peter, and the Crumplehorn
Willy Wilcox is a legendary character from the town of Polperro in southern England. In this story he meets some strange and magical creatures, and makes a friend.


Robin Hood and his Merry Men
The classic story of Robin Hood - outlaw of Sherwood Forest. This story tells how he met Little John, Marion, Friar Tuck, and the merry men.


'Twas the Night Before Christmas
A new version. You will recognize it as the classic Christmas poem, but it has been updated for modern children, with outdates ideas and words replaced with more familiar ones.

Here is a brief summary of some of the more famous myths and legends from across the years. We hope to supply you with fun story poems that retell some of these stories, one day.

Vikings had their own pagan religion, with many gods. The old stories they told about gods, giants and monsters are known as the Norse myths. 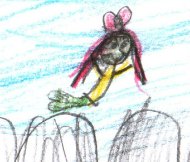