The story of Boudica is an amazing one. A woman who refused to be bullied, she stood up for herself, and took on the might of the Roman Empire.

This poem for kids by British writers Jon Bratton and Paul Perro was written in 2009, and celebrates Boudica's heroic stand.

If, after you have enjoyed the poem, you would like to know more about the warrior queen, please scroll down a little further for some interesting facts.

The illustrations on this page are by Mike Rooth.

This is a tale of Boudica.
The Iceni Warrior Queen,
One of the most fearsome women
There has ever been. 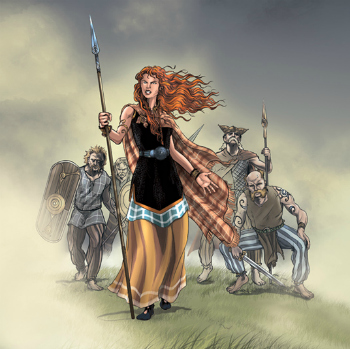 She wore colourful clothes and she
Was tall and strong and loud.
She had a mane of long red hair.
You’d spot her in a crowd.

She and her husband the King ruled
A place where Norfolk is today.
The king made a deal with the Romans
And paid them to stay away.

When the king died though
Things did not go as planned.
The Romans decided to claim
All the king’s wealth and land.

They came and stole from the Britons
Who were angry at being cheated.
What’s more the Romans were violent -
The queen and her daughters mistreated.

Queen Boudica was quite outraged;
She had never been angrier.
She summoned all of the tribes to
A place now called East Anglia.

"We can't let them do this to us!"
She said, "It isn’t right.
Let's get an army together
And let’s give the Romans a fight!" 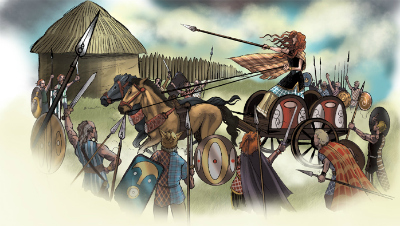 So all of the tribes joined forces,
They were led by the red-haired Queen
It was the biggest army that
Britain had ever seen.

Boudica’s army marched around
And they attacked town after town.
Wherever they found Romans lived
They burned their houses down. 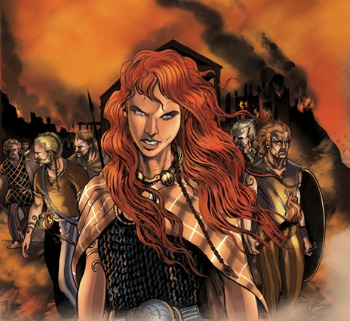 And Boudicca's massive army
Suffered its final defeat
Well beaten by the Romans at
The Battle of Watling Street.

Yes Boudica lost in the end,
The Romans won, it's true,
But Boudica had scared them
And taught them a lesson or two.

Yes they regretted they’d crossed her,
They paid a price for being mean
To the Britons, and the princesses,
And the mighty Warrior Queen.