This Poem about Dinosaurs for Kids, was written in 2008 by the British writer Paul Perro. We hope you enjoy it.

This is a fun poem, written to make the child smile, but it also contains some interesting and educational facts as well. It introduces the names of some of the best known dinosaurs, as well as mention of their diets, their tiny brains, and the fact that all that remains now are fossils.

When you have finished the poem please scroll down a little further to find a few more facts which we think you and your child will find interesting, and enable you to continue the discussion.

I've never seen a real dinosaur.
There are none around any more.
They lived in prehistoric time,
Let's learn about them in this rhyme. 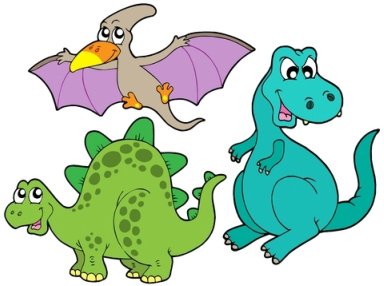 Dinosaurs all had tiny brains
But they all had ginormous names.
Triceratops, brontosaurus,
Velociraptor, stegosaurus.
Pterodactyl (with a silent "p"),
Ichthyothaur, that thwam in the thea,
And there was the Iguanodon -
That one had a spike for a thumb.

The big tyrannosaurus rex
Was very scary, one suspects.
It had a lot of big sharp teeth,
And a *ROAR* that defied belief.

Most dinosaurs liked plants to eat
Some preferred the taste of meat.
But none of them ate chocolate
It had not been invented yet.

Dinosaurs did not eat candy
And actually, this was quite handy;
Candy causes teeth to rot,
And dinosaurs had such a lot.

I really wish that I could get
A dinosaur to be my pet.
I would take him to school one day
And everyone would run away.

This won't happen, I realize,
Dinosaurs all met their demise.
Fossils are all that's left, it seems,
And you can see them in museums.

Facts About Dinosaurs for Kids


Back to Ancient History 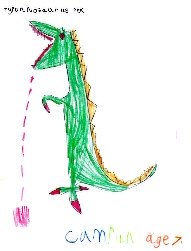