The story of Elmer the Flying Monk is well known in Elmer's home town of Malmesbury, where his daring and initiative are still celebrated today.

Elmer was a young monk with a curious and scientific mind, who wondered if it would be possible for a man to fly. He was ahead of his times in many ways.

This poem by Paul Perro, written in 2009, tells the story of the young monk's attempt at flight in a fun way, that children will enjoy.

When you have finished reading the poem, please continue to scroll down for some interesting facts about Elmer.

Elmer the Flying Monk
a poem for kids

Elmer had always wanted to fly,
He'd thought it would be fun
Ever since he'd heard about
A man who flew high as the sun.

Elmer gathered some feathers,
Wood, cloth, and other things,
And made himself a lovely pair
Of giant birdman wings.

He told his friends he was going to fly
And they should come and see.
Then he climbed to the top
Of the tower of the local Abbey.

His friends watched as he jumped
And flapped with all his might
And caught a gust of wind
That carried him in flight. 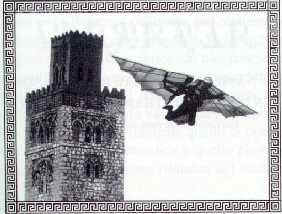 But alas, it did not last very long,
And he landed in some mud.
His friends were very worried
When they heard the crashing thud.

They all rushed over at once
To where poor Elmer lay.
They said “Elmer, are you hurt?”
And he said “I’m okay!

I think I’ll have another go
And this time I won’t fail.
All I really need to do
Is add a nice big tail.”

Facts about Elmer the Flying Monk


Back to the Middle Ages