The story of George Washington and the Cherry Tree, below, tells of the time the young future president of the USA chopped down his father's favorite cherry tree, but redeemed himself by owning up to it.

As inspirational as the well-known story is, it is sadly, almost certainly a myth. It was invented in 1800 by one of Washington’s early biographers, Mason Locke Weems, who was attempting to imbue George Washington with noble qualities.

Still, it makes a good bedtime story for kids. After you have enjoyed the poem, please scroll down a little further for more facts about the great man.

Little George Washington was a good boy
So his mummy gave him a brand new toy.
It was a little axe, a real sharp one,
And George thought that it would be lots of fun.

He took the little hatchet out into
The garden, where lots of plants and weeds grew.
He chopped at some weeds, chopped them to the ground,
After that he began to look around.

He looked around for something else to chop,
He was having a ball, and could not stop.
Right at the bottom of the garden he
Came across his daddy's best cherry tree.

He chopped at it with his little hatchet
The tree was big, he could only scratch it.
So he tried much harder, chopping the wood,
Until at last it fell down with a thud.

Then George was happy and put down his axe
And he sat down and started to relax.
Suddenly, a cry, it was George’s dad;
He’d seen the felled tree and was really mad.

“Who has chopped down my lovely cherry tree?”
His face was red he was really angry.
George was scared to tell the truth but he knew
Telling the truth was the right thing to do.
So George said “Sorry daddy, it was I,
I killed the tree, I cannot tell a lie.”

At first dad was cross, then he realised
As he looked into his little boy’s eyes,
George’s behaviour had been outrageous
But he’d been honest, which was courageous.

“My boy” said dad, “I’m very cross, but still,
Your honesty is quite admirable.
I cannot punish you because I’m so
Proud that you’re my son. I love you, you know.”

If you’re brave and honest, you can go far,
You can grow up to be a superstar.
Yes George grew up to be one of the greats
A President of the United States! 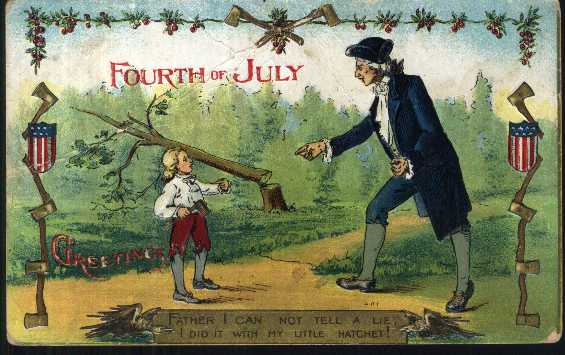 
Back to US History 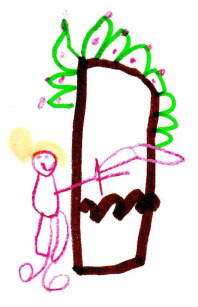