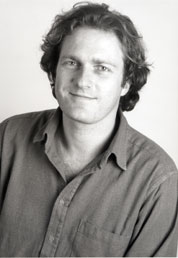 Giles Andreae is a superstar of the world of children's literature. His books include "Commotion in the Ocean" and "Rumble in the Jungle", and he is the man behind the massively successful "Purple Ronnie" character, used on greetings cards and TV adverts.

Hfk: Firstly Giles, I would like to say what a pleasure it has been reading your stories and poems to my own children over the years. They also enjoyed the animal impressions I added to them. The sense of fun between reader and listener must have been important to you?

GA: I always try to imagine what I write being read aloud, and I address the child. I think actions and voices, or taking on a character, can support the text, and help the child to engage.

Hfk: You seem to have created your own genre with the Rumble/Commotion/Hullabaloo/Galore series. I found them to be educational for my children - was that deliberate?

GA: No, not really, but I have heard that these books are popular in libraries and nursery schools - some teachers do find them educational. The idea was just to have a theme to hang the poems onto, giving a cohesive collection.

Hfk: Are there any plans to expand the series?

GA: Actually yes, "Marvellous Minibeases" is about to be published. I wrote it in response to requests from several nursery school teachers, who wanted it because minibeasts is on the national curriculum.

Hfk: Can you give us a sneak preview of it?

GA: I think that might upset my publishers, but I can can tell you that my favourite verse is the one about the ladybird.

Hfk: Some of the children's books you have written recently (dinosaurs, pirates, Luke Lancelot) suggest you have an interest in history and mythology?

GA: Yes, I think history and mythology are more exciting and more visual than everyday life, and certain periods of history can really stir up the imagination. I used to live in Oxford, England, which is full of incredible architecture, and has been the backdrop to many extraordinary events over the years.

Hfk: I believe you share an office with Richard Curtis. I there any chance you could persuade hime to write another series of Blackadder?

GA: I would if I could, because I loved it too, but I am afraid that is not within my powers. Richard is very busy saving the world now.

Hfk: I read somewhere that you are the top selling living poet in the country. How does that feel?

GA: Well, I think that is a tag the poetry society might have issue with. It is technically true, but I take it as being tongue in cheek. It is nice though, and the fact that 100 million copies of my poems have been sold does make me feel rather proud.

Hfk: Could you tell us what you are working on at the moment please?

GA: I am publicising my latest book, which has just come out, "Morris the Mankiest Monster". It is aimed at 3 to 7 year olds, and I believe it is the most disgusting children's book ever! Also, I am working on an animated series of Captain Flinn and the pirate dinosaurs.

Hfk: Giles, thank you very much for taking the time to talk to us.