The Great Fire of London

The Great Fire of London poem for kids, by Paul Perro, tells the story of the time, hundreds of years ago, when a fire started in a baker's shop in London, and spread throughout the city.

The Great Fire of London is a fascinating story from history; without it, London would be a very different place today.

Paul Perro's poem, written in 2009, is fun and easy to read. However it also touches on some of the more interesting aspects of the fire, such as the absence of firebreaks, the indecisiveness of the mayor, the failure of the fire engines, the significance of the wooden buildings, and the heroism of the king.

After enjoying the poem, please scroll down a little further to find out some more facts, that will help you discuss the subject with your child for a little longer.

The year was 1666,
Late one September night,
The baker’s shop in Pudding Lane
Glowed with an orange light.

The baker's oven was on fire
The flames began to spread.
Thomas the baker was upstairs
He was asleep in bed. 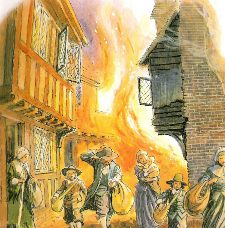 Before too long the walls caught fire
There billowed out black smoke.
The fire made such a loud noise
Tom suddenly awoke.

The firemen saw the shops nearby
And said “Let's knock these down,
Or else they will catch fire too
And it will spread through town.”

But no, the Mayor would not do that,
He said “Just hang about,
The fire is not that bad, you know
Wee* could soon put that out!”

So they tried to put the flames out
But they just grew higher.
Sure enough they spread, soon half of
London was on fire. 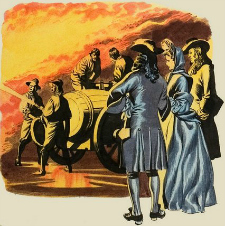 King Charles sitting in his palace
Thought something must be done
He sent out a fire engine
With a big water gun.

They went to the Thames for water
But at the river bank
The fire engine slipped in mud,
Fell in the Thames, and sank!

When the king was told about this
He was really upset.
He realised that the fire posed
A very serious threat.

He decided that he must help,
Put on his boots and cloak,
And he marched out of his palace
Towards the fire and smoke.

He helped some fire-fighters who
Had started to despair,
And everyone was really glad
That the good king was there.

Eventually, the wind died down -
The fire died down too.
London would have to be rebuilt
There was much work to do.

The damage caused would have been less
In sixteen sixty six
If the houses weren't made from wood,
If they were made from bricks.

The Great Fire of London Facts 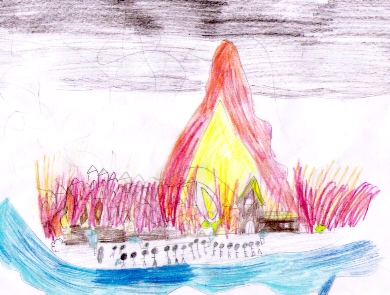 If you would like more information about the Great Fire of London, please see www.fireoflondon.org.uk

Back to the British History