Hadrian's Wall is a 84 mile long wall that built in Northern England by the Roman Emperor Hadrian, to keep the Scots out of the Roman occupied lands.

Despite being nearly 2000 years old, many parts of the wall are still standing today, and can be visited and even walked along.

This poem for kids by Jon Bratton and Paul Perro celebrates the great wall of England. When you have finished reading the poem, if you would like to find out more about the wall, please scroll down a little further.

When the Romans conquered Britain
Thousands of years ago.
They built towns in England and Wales,
They didn't want Scotland though.

The Scotsmen and the Romans
Did not get on at all.
To stop the Scots from stealing sheep
The Romans built a wall.

It stretched from Solway Firth in the west
To the Newcastle in the east.
To build it they used many stones,
Millions, at least.

The Emperor who was in charge,
(Hadrian was his name)
Did lots of things during his reign
But the wall gave him lasting fame.

It took fifteen years to build it,
Things took longer back then.
Hundreds of horses pulled the carts
There were thousands of working men.

They built forts and towers as well
They built them very tall,
So the Romans could see the Scots
Who tried to sneak up to the wall.

The Romans stayed in Britain for
Hundreds of years, altogether.
I wonder why they stayed so long?
It couldn't have been the weather.

That the wall was built to last
Would be a fair thing to say.
It was built thousands of years ago
And is still standing today.

Indeed, from all around the World
People come to see it.
There's always a tourist around
You can almost guarantee it! 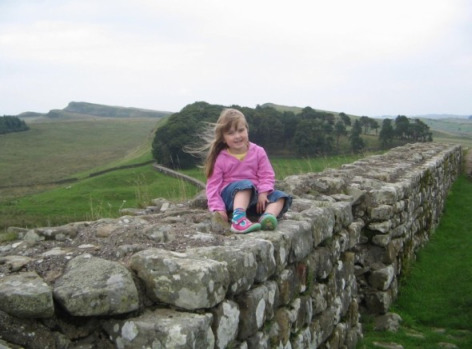 If you would like to find out more about Hadrian's Wall, visit aboutscotland.co.uk 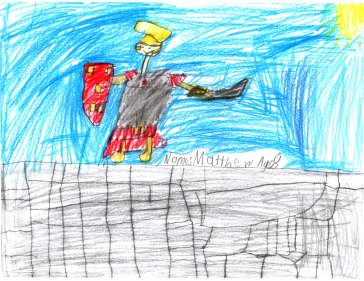