The History of the Olympics

This collection of poems by Paul Perro about the history of the olympics celebrates its origins in Ancient Greece, as well as the more recent heroics of modern Olympians.

Hercules, Zeus, the five rings, and competing in the nude. It's all here! We have fun poems about the ancient Olympics as well as the modern games.

These poems are fun, educational, and free. If you are a teacher or parent, please feel free to print off these poems about the Olympics to read to your child or children. You might find that doing so raises some questions from your little ones. If you scroll down to the bottom of the page, you will find some further information which might be of help to you.

The Ancient Games
You've heard of the Olympic Games
I'm sure you've seen them on TV,
But did you know they first began
In 776 BC?

'Twas Hercules who founded them
So he could celebrate
His most recent heroic act
'Twas something really great.
He'd cleaned a filthy stable that
Was full of horse manure.
...Well, that's the legend anyway
Nobody knows for sure.

There were lots of sports and games
Running, throwing, jumping,
And something called "pankration":
Wrestling, with thumping.

Back then all athletes competed
Completely in the nude.
If somebody did that today
We'd think it very rude.

One day a Christian Emperor
Named Theodosius
Stopped the games forever,
Because they honored Zeus.

But hundreds of years later, at
The end of Queen Vic's reign
Somebody had the bright idea
To bring them back again.

Five Rings
The Olympic Games' symbol is
Five rings, which represents
The fact that countries now compete
From all five continents. 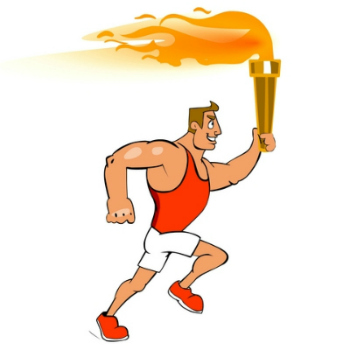 The Olympic Torch
In '36 was a new tradition,
One which is still going today,
Just before the games start
They have the Torch Relay.

Athletes from the host nation
Run round carrying flames
Getting people in the mood
For the Olympic Games.

Olympic Heroes
Every country has its heroes,
Winners from years past.
Champion athletes, gymnasts, swimmers,
Skillful, strong and fast.

Great Britain
From Britain, Stephen Redgrave was
The greatest ever rower,
And Tessa Sanderson was a
Champion javelin thrower.

The cyclist Chris Hoy won the gold
By being fast on those pedals.
And Daley Thompson whistled as
They handed out the medals.

And nobody in Great Britain
Could possibly forget
The exciting rivalry
Between Coe and Ovett.

So many heroes in 2012
Mo Farah, Tom Daley, Jess Ennis,
Wiggins won a cycling gold,
And Murray won the tennis.

USA
In the US they remember
Gymnast Mary Lou,
The discus thrower Oerter, and
All-rounder, Jim Thorpe too.

They won't forget the great swimmers
Like Phelps, Lochte, and Spitz,
Or the runners: Lewis, Moses, Johnson,
They love them all to bits.

A black man, Jesse Owens once
Put Hitler in his place
In '36 he proved the Nazis
Weren't the master race.

Immortality
Yes, there've been many superstars
At the Olympic Games,
And now, many years later, we
Can still recall their names

Facts about the History of the Olympics 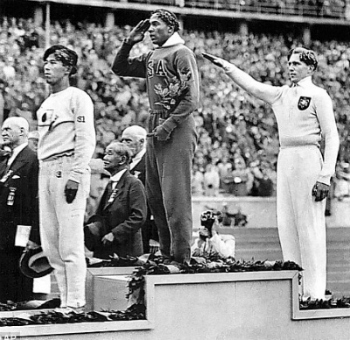