This poem by Paul Perro is about the history of vikings - those misunderstood Norsemen who made such an impression on the world in the middle ages.

Here you will learn about the lives of Vikings, the famous warriors and explorers, and their religions and mythology. Find out about Eric the Red and Ragnar Hairy Breeches; as well as Odin, Thor, and Valhalla.

After you have enjoyed the poem, please scroll down a little further to find out more facts about the Vikings so that you can hopefully answer any questions your child has.

History of Vikings
a poem for kids by Paul Perro 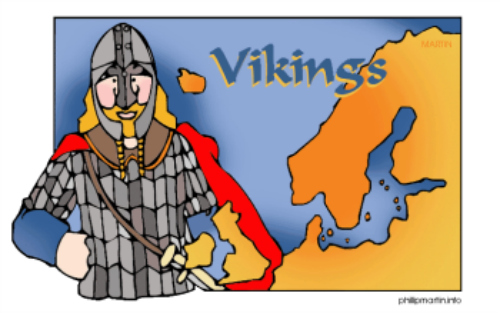 The Vikings lived a thousand years ago
In Denmark, Sweden and Norway
Sometimes called Norse
They're gone now of course
But we think of them still today.

There were kings who ruled the lands,
And there were farmers and traders.
Jarls were the richer men,
Others were fishermen,
Some were viking raiders. 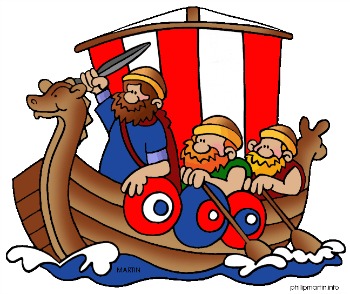 These raiders sailed to England
In longships made of wood.
They'd burn and pillage
Any small village,
And steal everything they could.

One famous viking was Ragnar Hairy Breeches.
He once raided Paris, in France.
Success brought him fame
But what a silly name!
Who'd want to be called hairy pants?

Famous explorer Eric the Red
Found a place that was windy and freezing.
He called it Greenland
And this, so he planned,
Would make it seem rather more pleasing.

Eric's son Lief was an explorer too
He captained a longship with 35 men.
Clever and plucky
Nicknamed "Lief the Lucky"
He sailed to America and back again.

Vikings believed the afterlife was
A great hall called Valhalla -
A huge feast where
The only men there
Were warriors, men of valor.

Odin was the king of the gods
Worshipped by the Norse.
He had a long beard
But what's really weird,
Is he rode an 8-legged horse.

There were lots of other gods and goddesses,
Like Freya - pretty and sweet,
And mighty Thor,
God of thunder and war,
And Loki, with his lies and deceit.

That's enough about Norsemen for now,
We've learned they were lots of things -
Explorers and thieves,
With such strange beliefs,
Let's say goodbye to the Vikings.

Facts from the History of Vikings

Back to Middle Ages

Back to History for kids Homepage