Icarus - The Rise and Fall

This well-known myth from Ancient Greece is told, for the first time, as a  lively modern rhyme for children.

The story is centered on Daedalus, an inventor - a man so clever that he can build things that defy the laws of physics; and his son, Icarus, a boy who learns the hard way that children should listen to their parents.  Does it matter that we now know that flying "too near to the sun" does not actually make sense?  You decide.

This poem was written in 2014 by Paul Perro. We hope you enjoy it.  Please note that it is not suitable for very young children.

The cleverest man alive was
A man called Daedalus -
An inventor, an engineer,
An all-round genius.

He built, and knew the secret of,
The labyrinth of Crete,
And King Minos was worried that
He would be indiscreet.

So Daedalus was locked up,
With young Icarus, his son.
Of course, they soon escaped though, and
The pair went on the run.

They wanted to get back to Greece,
Their home, where they'd be free.
The problem was, the island Crete
Was surrounded by sea.

They could not use a boat because
The boats were all the king's.
Daedalus decided to make
Two giant pairs of wings.

Made out of feathers, string, and wax,
The wings were quite a sight.
Daedalus strapped them on tightly
And soon they were in flight.

"Fly straight ahead young Icarus"
The boy heard his dad say.
But flying was so much fun that
He got carried away.

Laughing, whooping, loop-the-looping,
Flying was really fun,
He flew too high up in the sky,
Too near to the sun.

The sun’s heat melted the wax and
The wings soon fell apart.
Icarus fell to his death, and
It broke his father’s heart. 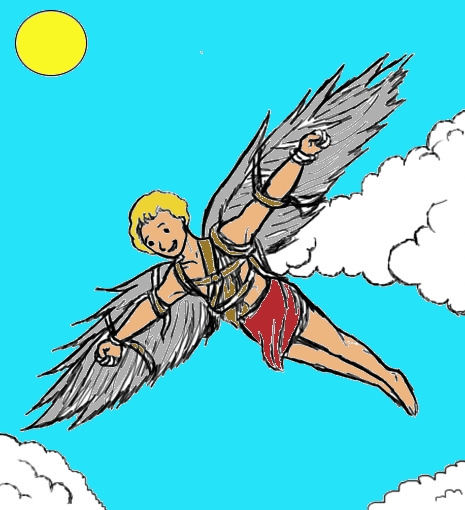