The story of Lady Godiva and her legendary naked horseback ride through the streets of Coventry is told here in the form of a children's poem, by British children's writer Paul Perro.

Everyone knows the story of Lady Godiva, but do you know who she was or why she did it? Well, Godiva was a good woman who carried out her daring stunt to help the poor people of her home town. Paul Perro's poem below tells the story in a fun way.

Did it really happen or is it a myth? Well, possibly a little of both. To help you decide, we have collected some interesting facts at the bottom of this page. After you have enjoyed the poem, keep scrolling down to find out more.

Lady Godiva
a poem for kids by Paul Perro

Leofric was a rich man
And he lived in Coventry.
His wife was called Godiva
And she was as kind as could be.

Godiva said to her husband one day
“It’s a terrible thing I’m sure
That we have so much money
While everyone else is poor.

Perhaps we can give some money away
To help the hungry and needy.
We can keep a little bit for ourselves
But I think we should stop being greedy.”

Her husband laughed and said “My dear,
Stay away from my moneybox!
You wouldn’t last five minutes
If we couldn’t afford your fine frocks.”

Godiva thought for a while then said,
“Let us both take oaths
That we will give our money away
If I can prove I don’t need clothes.”

The next day she got on her horse
And let down her long hair.
Nobody could believe what they saw,
Godiva was totally bare.

“We must avert our eyes” said one,
“Or else it would be rude.
It’s not polite to stare at a lady
When she is in the nude.”

So everybody looked away
Apart from Peeping Tom.
He had a sneaky peak and saw
Lady Godiva’s bum.

When Godiva got back home
Her husband said “I guess
We’ll have to give our money away.
You’ve proved you don’t need your dress” 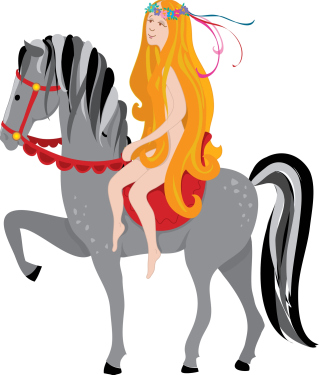 Back to the Middle Ages