The Legend of Robin Hood
and his Merry Men

The legend of Robin Hood is a poem for kids by Daniel Koschalka and Paul Perro.

The story of Robin Hood and his Merry Men has been told many times through history. The true facts of the legend are not known. Each time the tale is retold something new is added, but the core elements remain the same - Little John, Maid Marion, the Sheriff of Nottingham, stealing from the rich to give to the poor ...

Here it is as a fun poem for kids, ideal for a bedtime story.

The Legend of Robin Hood
- a poem for kids

Pin back your ears and listen
To this famous tale of a brave outlaw
Who loved stealing gold from England’s rich,
And giving it out to England’s poor.

The famous legend of Robin Hood!
Fabulous tales, passed through the ages.
Here are some of the stories
Set down for you now in these pages. 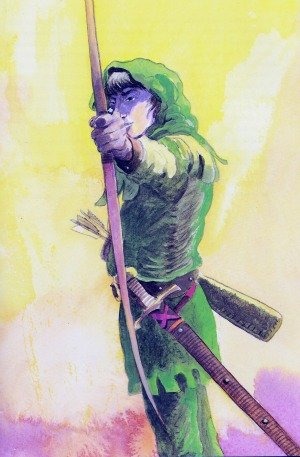 One day Robin was in the woods
With his bow and quiver.
He shot a bird to cook for his lunch
Then headed home across the river.

On the old bridge stood a huge man
“Little John” was his name.
He would not let Robin cross
He wanted to play a game.

They fought each other with big sticks
And Robin fell into the stream.
John helped him out of the water
And said with a smile “We’d make a great team!”

Robin Hood gladly agreed
And they went off as a pair,
Robin Hood with his bow and arrow
And Little John, strong as a bear.

Over the years others joined them,
In the forest they made their den.
Will Scarlett, Much, Alan A’Dale,
Robin called them his merry men.

One day a coach came through the forest
And the men saw a chance for some fun!
They shouted “We’re outlaws - give us your gold!”
And a boy jumped out and started to run!

Robin gave chase and caught him
Pulling off the boy’s hat.
Robin realized it wasn’t a boy,
But a GIRL, and a pretty one at that!

Her name was Maid Marion
She put up quite a fight.
Robin thought she was great
It was love at first sight.

“I like your attitude” said Robin,
“You’ve got style and sass.
I want you to join me and my men
And be my merry lass!”

Marian and Robin went to get married
But the Bishop said “not on your nelly!
A ratbag like you can’t come to my church
You’re common and dirty and smelly.”

On the way home they met a monk
Standing by a stream.
He said “You shall not pass!”
Another challenge it would seem.

His name was Friar Tuck
And he asked them a riddle or two.
Of course Robin got the answers right
He laughed, “I’m smarter than you!”

So Tuck carried Robin across the stream
But dropped him, and Robin got wet.
Marion laughed and said that the monk
Was the merriest man yet.

And Robin had had a good idea
While he was being carried.
This monk could perform the wedding
So Robin and Marian were married.

And though it’s now time to leave our new friends
Fear not, it's not the end of their story
As long as folk love to read a good tale
The name “Robin Hood” shall echo in glory!

Back up to Myths and Legends