A fun rhyming poem retelling the Ancient Greek Myth of how Perseus slew Medusa, the Gorgon.

This is the traditional version of the classic story.

The story forms the basis of the movie "Clash of the Titans" and both the movie and the poem contain some violence which make them unsuitable for young children.

When you have finished reading the poem, please scroll down a little further to read some comments on the myth.

The Myth of Perseus and Medusa
A Paul Perro poem

This is the tale of the great Perseus,
Legendary son of the mighty Zeus.
He lived on Seriphos with Danae,
His beautiful mother, easy on the eye.

When the king met Danae, he was impressed.
He said "Marry me!" It was not a request.
Danae found the king obnoxious and mean,
She really did not want to be his queen.

The king got angry at this rejection.
So Perseus came to her protection;
He said to the king "Please drop this demand,
And I will do anything you command."

The king sneered and replied to him, "You sir,
Must bring me the head of the Gorgon Medusa."
Perseus replied "This thing that you ask
Is sure to be an impossible task.
I did promise though, so I'll do my best."
And off he marched on his epic quest.

The Gorgon sisters were nasty creatures,
Horrible hags, with hideous features.
Bodies covered in scales, sharp knifelike claws,
Big leathery wings, and tusks like a boar's.
Medusa had no hair on her head,
She had a writhing mass of snakes instead.
She really was such an ugly old crone,
Just one look at her would turn you to stone.

Young Perseus knew he had no chance,
He would be turned to stone with just one glance.
The gods, however, were watching from on high,
And they had pity on the poor guy.
They gave him a super-sharp crystal sword,
Much better than any he could afford;
They gave him a shield that shone like silver,
It gave a reflection like a mirror.

Next Perseus had to discover where
Medusa and her sisters had their lair.
The gods had given an indication
That "three grey women" knew the location.

Three old sisters, dressed in rags,
Almost blind and toothless hags -
They had one eye that they all shared -
Not quite blind, but visually impaired.

They did not see Perseus tiptoe by,
Not until he reached out and grabbed their eye.
Above the chorus of protestation,
He said that he wanted information.
So they told him where to find the Gorgon,
And Perseus gave back the stolen organ.

He found the place, and was surprised to see
It was filled with statues. Why should that be?
He said to himself "Well, I do suppose
These must have all once been the Gorgon's foes."

So into the monsters' lair he crept,
And into the room where Medusa slept.
He held up the shield, polished and shiny,
And used the reflection so he could see.
He then used his sword to kill the old hag,
And put her severed head into his bag.
The sisters awoke, and saw what he'd done,
And Perseus thought he had better run. 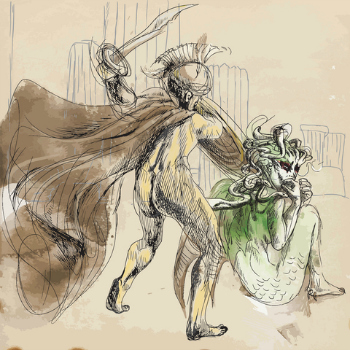 Our hero made it back to Seriphos.
When the king saw him he was pretty cross.
He had thought the young man would have been killed,
But he had not, and the king wasn't thrilled.

"You must let my mum go!" Perseus said,
"I've killed Medusa and brought you her head."
The king said "No, I don't care, I command
That Dinae agrees to give me her hand."

Perseus snarled "Here's your wedding present!"
And plucked from the bag something quite unpleasant.
He held Medusa's head up in the air,
Its eyes fixed the king with a cold dead stare.

The king gasped and gave out a little moan,
The he went quiet - he had turned to stone.
And so, this tale of danger and violence,
Ends with just a stony silence.

Comments on the Medusa Myth 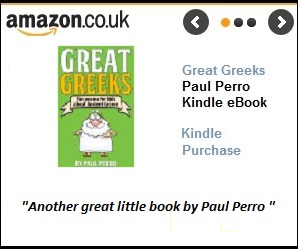