Astronauts and space travel often seem futuristic, but the first lunar landing was more than 40 years ago; it is a part of history. This poem for kids by Paul Perro celebrates the first ever visit to the moon, mankind's most amazing achievement.

Man wondered for many years what it was like on the moon, and in 1969 NASA sent a team of highly trained astronauts to find out. This poem imagines instead, that Uncle Sam sent two young boys there, called Neil and Buzz, to settle an argument about whether the moon is a giant face, or made of cheese.

It is perhaps not the most historically accurate poem on this site, but if you read it carefully you will see that many of the main elements of the real story are there, and it serves as an introduction to the real story. It's fun too.

To find out what really happened on the Apollo 11 mission, scroll down past the poem.

Moon Landing
A poem for kids by Paul Perro

Once upon a time, years ago,
There were two boys called Neil and Buzz.
They were having an argument
And this is what it was.

"I think the moon's a giant face"
Said Neil. "Everybody agrees."
But Buzz said "No, Everyone knows
The moon is made of cheese!"

They argued on, "I'm right!" said Buzz
But Neil said "No you're not, I am!"
Eventually they decided
To ask their Uncle Sam.

So old uncle Sam listened to
The two young boys argue and shout,
And he said "My boys you must go
Up to the moon and find out!"

And old Uncle Sam decided
That he would help them, so,
He built the boys a rocket ship
And called it Apollo.

The boys climbed into the rocket
And they turned on the ignition.
"Three, two, one,...blast-off!" they were off
On their lunar mission.

Up they went high into the sky
Up higher, and higher, and soon
They'd left the earth far far behind
And landed on the moon.

The boys climbed down from the rocket,
But the stairs were really quite steep.
Perhaps a small step for a man,
For boys, a giant leap. 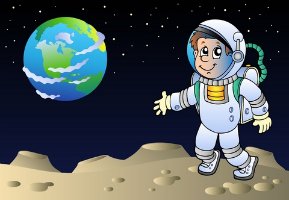 Once on the moon they discovered
It was a cold and rocky place.
It was not made from cheese, and it
Was not a giant face.

"Well" said Buzz, quite disappointed,
"This is not a fun place at all.
I wish there was a cinema,
Golf course, or shopping mall."

They had a good look round the moon,
And took lots of photographs too.
They put up a flag, but then they
Ran out of things to do.

"I want to go back home" said Buzz,
And nodding, Neil said so did he.
They got back in Apollo and
Turned the ignition key.

The rocket took them back to Earth
A bit like in an airoplane.
Space travel had been fun but they
Were glad to be home again.

Facts About the Moon Landing 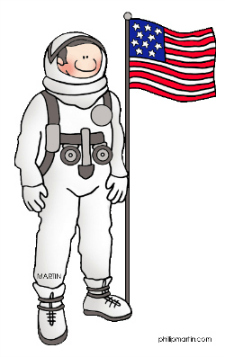 Back to American History