The Myth of the Minotaur

This fun poem for kids tells the story of the great ancient Greek hero Theseus, and his battle with the monstrous minotaur. The minotaur was a giant with a bull's head, who lived in the labyrinth of Crete.

Evil King Minos of Crete had been feeding innocent people to his pet monster, until Theseus decided to put a stop to it, with a little help from a princess and a ball of string.

Paul Perro's poem, below, tells the story in an exciting but fun way.

When you have finished reading the poem, please scroll down a little further to find out a little about the origins of the myth.

The Myth of the Minotaur
A poem by Paul Perro

There once was a king called Minos,
Who ruled an island known as Crete.
He was the meanest, cruellest king
That you could ever meet.

The monster lived in the labyrinth,
A huge maze of long corridors.
King Minos kept it locked up there
Behind big strong oak doors.

But every now and then, the king
Would give the minotaur a treat.
He'd put some people in the maze
For the monster to eat.

One day, a hero, Theseus,
A very brave young man,
Decided to end the killings,
And came up with a plan.

He offered to be sacrificed
To the monster with the bull's head
But he did not plan to be killed,
His plan was to kill it instead.

Minos's daughter, the princess,
Thought Theseus was cool.
To help him succeed on his quest
She gave him a big ball of wool.

She told him to let out the wool
Behind himself, as he explored,
That way he'd find his way back out.
And she also gave him a sword.

Theseus found the minotaur.
It gave a terrible bellow.
But Theseus was not afraid,
He was a courageous fellow.

It lowered its horns and charged, but
Theseus jumped aside.
He stabbed the monster with his sword
And it fell down, and died.

Then he followed the trail of wool
And found himself outside once more.
And no-one ever was again
Eaten up by a minotaur.

Origins of the Myth 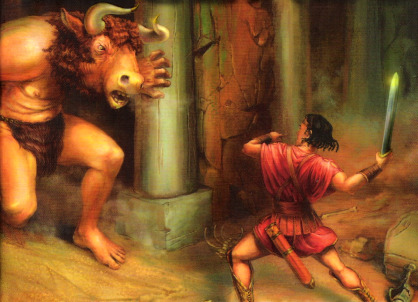 The myth of the minotaur is a famous legend from Ancient Greece.

Minos was the king of Crete, and the legend possibly derives from his demands of human sacrifice from other Greek cities. It is likely the ceremony was performed by a priest wearing a bull head or mask.

Also, archaelogists have found that the ancient royal palace of Crete was laid out like a maze, and that a dangerous sport similar to bull-fighting was very popular. The myth of the minotaur might have arisen from stories about them.

There are many myths about a hero called Theseus who became king of Attica in Greece. Historians have proved that a real king Theseus did once exist. He is often credited with building Athens into an important centre of power. Today it is the capital of the country