This fun and lively rhyme for kids was written in 2014 by Paul Perro.

According to Ancient Greek Mythology, it was Prometheus who created mankind.

This poem tells the later story of how Prometheus tricked Zeus into helping his beloved humans, and also how Prometheus helped mankind's development by stealing fire from the gods for them, angering Zeus even more in the process.

We hope you enjoy it.

Prometheus
A poem for kids by Paul Perro

Back in Ancient Greek times there was
A strange thing called a “sacrifice.”
To keep the gods in a good mood
The humans had to pay a price.

The gods were arguing one day
What exactly should that price be?
They argued and argued for hours
But they could not agree.

“I know who we should ask for help,”
Declared the mighty Zeus,
“The one who created humans,
Bring me Prometheus.”

So Prometheus was sent for
And he came straight away.
Then Zeus asked him what he believed
Should be the price to pay.

Prometheus loved the humans,
He was their maker after all,
So he decided to trick Zeus
Into making it really small.

He showed two bags, one big, one small,
And gave Zeus the choice of the two.
Of course Zeus chose the bigger one
As Prometheus knew he’d do.

So Zeus was very disappointed
When Prometheus showed him that
The little one held all the meat,
The big one, bones and fat.

But Zeus soon realized he’d been tricked
And he was very cross.
He thought that it was time to show
Prometheus who’s boss.

“So let the humans have their meat,”
Zeus held up his fist and shook it,
“I won’t let them have fire so
They won’t be able to cook it!”

Prometheus was not impressed
At this childish display of spite,
And he decided that he would
Stand up for what was right.

He climbed a mountain, lit a torch
From the chariot of Apollo,
Then took the flame and gave it to
The humans down below.

Zeus was furious when he saw
That he had refused to obey.
He decided to punish him
In an extremely nasty way.

Prometheus, chained to a rock,
As punishment for his crime,
Heard Zeus decree this punishment
Would last until the end of time.

To make his torment even worse
Each day an eagle would attack,
And peck out his liver, but then,
Each night it would grow back.

Prometheus was not chained up
For all eternity.
You see, one day, great Heracles,
The hero, set him free. 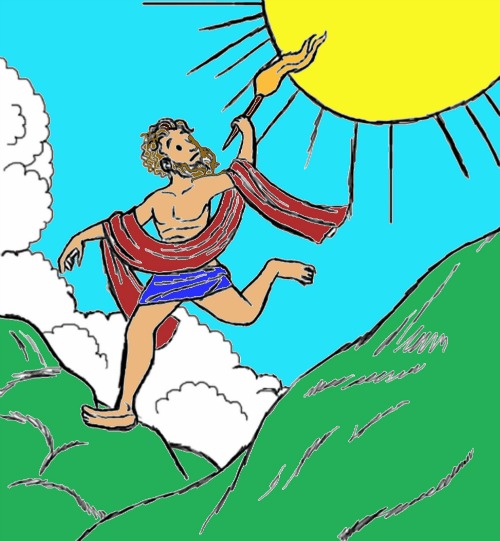