Robert Lacey is a British historian and biographer. He has written many books, including several about the Royal Family, and about Saudi Arabia. His book "Great Tales from English History" is a fascinating collection of stories featuring events, heroes and villains from English History, from ancient times to the twentieth century.

Hfk: Firstly, I would like to say what a fan I am of your work. I loved your book "Great Tales from English History", and I have lost count of the number of times I have played the audio-book version in my car. It was that book that inspired me to create this website, as I wanted to share some of the stories with my young children.

RL: Thanks. I am very honored to have been part of your inspiration -- I love your poems, especially the SS Great Britain poem. I remember being in Bristol when the old ship came home in 1970.

Hfk: What do you remember about it?

RL: I remember looking down from the Suspension Bridge to see the SS Great Britain come steaming back proudly up the river . . . No I don't! I saw it on television, and the old hulk was towed up to dry dock, of course. It was a great event for me, a kid who grew up in Clifton. I'd stood on that Suspension Bridge so many times that I felt as if I were there.

Hfk: Have you seen it recently? They have done an amazing job restoring it - going on board is like going back in time.

RL: I agree with your enthusiasm. The restored ship is a marvellous work of salvage and re-creation -- history coming back to life again.

Hfk: Can you suggest any other stories from history that would convert well to story-poems for young children?

RL: Castles and battles and lowering forests have proven appeal in the story-poem department. But there are epics to be found almost anywhere -- in the history of modern industrialization and science, for example. That's why I enjoyed ending my "Great Tales" with the story of how DNA was identified.

Hfk: Did you try to encourage your own children to take an interest in history, and if so do you have any tips for other parents?

RL: History has been my love from an early age, but I never consciously tried to foster this in my children. It think it can be damaging and counter-productive to foist your own enthusiasms on your kids. They are not carbon copies. They must go their own way. The Science Museum, The Cutty Sark, A game of football on the Downs… I tried to offer options -- as my own parents did for me.

Hfk: There are so many great stories around. Why do you think it is that there are no big movies or TV shows about some of the stories you feature in your book - e.g. John Churchill, Richard II, Dr Crippen, Francis Drake, or Horatio Nelson? Film makers only seem interested in Henry VIII, Julius Caesar, Robin Hood, Elizabeth I and World War II.

RL: I sometimes wonder whether film and TV drama is not run by the costume department - "Let's use those Tudor/Jane Austen outfits again". But an original mind can animate any dilemma. Look at how Peter Morgan took royal life at Balmoral in September 1997 to fashion his Oscar-winning film "The Queen" -- with a little help from Helen Mirren.

Hfk: Speaking of Nelson, your book states that the anecdote about him putting the telescope to his blind eye is most likely a myth, but Wikipedia reports it as a true story. I assume Wikipedia is wrong - do you think it is generally as unreliable as some people say? Is it tempting to use it for research though?

RL: I am a great enthusiast for Wiki. I enter the word in all my Google searches. Wiki makes mistakes, but it has developed valiant mechanisms to try to correct them, along with some transparent techniques that remind us of the inherent imperfections and partialities in how history gets reported and recorded. History is NOT what actually happened. It is the fragments of past life that human beings have selected to preserve and reconstruct in our own fallible way -- and for our own fallible reasons. I think that the story of Nelson putting the telescope to his "blind eye" is most likely a myth -- but who knows? Like all myths, it contains its own sort of truth.

RL: I would love to write Great Tales from Scottish, Irish and Welsh History. I've started research on Great Tales from Classical History. Then, yes -- why not Indian, Chinese, Australian History? The world is awash with wonderful stories. In fact, I have just concluded some pretty compulsive tales from recent Arabian History featuring iconic characters like Osama Bin Laden. The book is called "Inside the Kingdom" published by Hutchinson-Random House in the UK and by Viking-Penguin in the US. It's the story of the last thirty years of Saudi history, the growth of extremism that led to 9/11, and what the Saudis are doing about it. My last Saudi book ("The Kingdom" published in 1981) got banned there. So let's see what happens to this one!

Hfk: Thanks for your time Robert, and good luck with the new book. 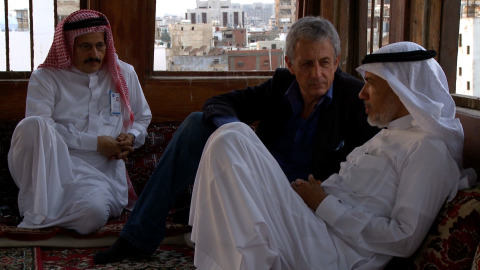