The Seven Wonders of the World

A collection of fun verses about the seven wonders of the world, by Paul Perro.

Not all Ancient Greeks agreed at the time on what the seven constructions should be (some included Walls of Babylon or the Ishtar Gate) but nowadays it is generally accepted that the seven wonders are the Colossus of Rhodes, the Hanging Gardens of Babylon, the Statue of Zeus at Olympia, the Mausoleum of Halicarnassus, the Lighthouse at Alexandria, the Temple at Ephesus, and the Great Pyramid at Giza.

The Seven Wonders of the World
Poem by Paul Perro

Do they walk on their heads
In the place they call "Down Under"?
This is something about which
I often stop and wonder.

The seven wonders of the world
Are a different sort of thing.
They're things you wonder at
Because they're so amazing. 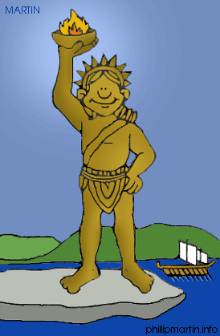 The Colossus of Rhodes
The people of the island Rhodes
Once built a huge metal statue.
A bit like that one in New York,
Except it was not greeny blue.

They made it from bronze which they took
From the armour of an enemy.
When the sun glistened on it it was
A spectacular sight to see. 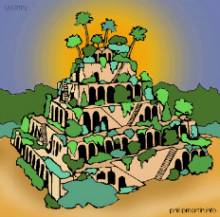 Built by Nebuchadnezzar,
A gift for his homesick queen,
To remind her of her homeland,
A mountainous land, lush and green. 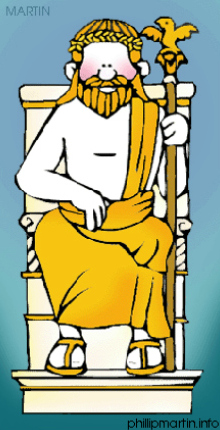 The Statue of Zeus at Olympia
A statue of the mighty Zeus
Of all the gods, he was the king.
The columns were in the "Doric" style
If you care about that sort of thing.

Built to honour the Olympic Games
The statue is now long gone,
But the stadium has been rebuilt
And the spirit of the games lives on. 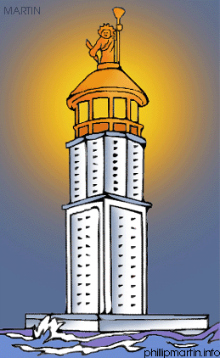 The Lighthouse at Alexandria
On the cliffs of the island of Pharos
A lighthouse guided ships into port.
People went there especially to see it,
It became a tourist resort.

Eventually an earthquake destroyed it
And it fell in the sea, and sank.
A visiting tourist today would need
A wet suit and an oxygen tank.

The Temple at Ephesus
Someone once burned this temple down,
A man who just wanted some fame.
The Ephesians punished him by banning
Everyone from saying his name.

The temple was destroyed a few times
But each time they built it back grander.
Everyone agreed it was beautiful,
Even the great Alexander. 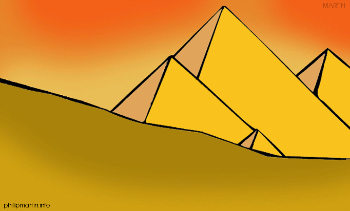 The Great Pyramid at Giza
The Ancient Egyptians built
The great pyramid
Did they really?
Yes they really did.

'Twas once the tallest building ever,
Taller than the treetops.
It was built as a tomb for
A pharoah, name of "Cheops".

Of all the seven wonders
This is the only one
That is still around today -
All the rest have gone.

So if you have a burning wish
To see a tomb that's pointed,
Take a trip to Egypt and
You won't be disappointed.