Francis Drake
and the Spanish Armada

Francis Drake is regarded as a hero in England, but he was despised (and feared) as a pirate in Spain. This poem tells of the time he drove away a huge Spanish invasion force...after he had finished his game of bowls of course.

After many years of daring exploits at sea, outsmarting his enemies and stealing their gold, Drake's finest hour came when the Spanish Armada was spotted off the coast of Plymouth. He took command of the English fleet, outmanoevred the armada, and broke up their formation using fire ships. The Spanish ships fled, and England was safe.

After you have finished reading the poem, scroll down for more about the Spanish Armada.

Francis Drake was a pirate who
Sailed all around the world.
He liked to attack Spanish ships
And steal their jewels and gold.

He gave the treasure to the queen,
She thought him a hero.
The Spanish were scared and called him
The dragon, "El Draco."

One day Francis was playing bowls
With some friends by the sea,
When he spied some Spanish ships coming,
They'd come for their jewellery. 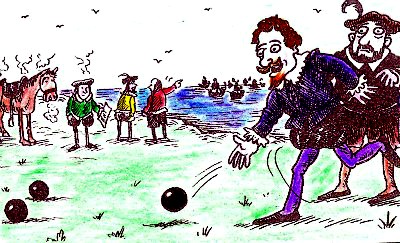 "Quick" said his friends, "Let's go at once
And chase those ships away!"
But Drake said "No, let's finish our game,
We still have time to play."

And when at last the game was over,
Francis Drake said "Right!
Let's play a trick on the Spanish,
We'll give them such a fright."

He took an empty ship and he
Set fire to the mast,
Then pushed it at the Spanish who
Were looking on, aghast.

They saw the fireship coming
And they were filled with fear.
"The dragon!" they said,"Vamanos!
Let's get out of here!"

The Armada turned around
And headed back to Spain.
Drake laughed and shouted out at them
"Don't dare come back again!" 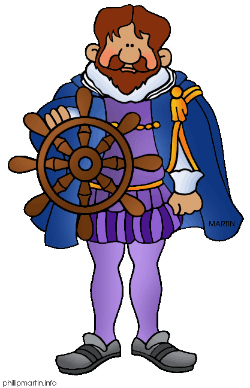 Back to British History