This poem for kids by Paul Perro tells the true story (sort of) of the magnificent SS Great Britain, one of Isambard Kingdom Brunel's greatest achievements.

Brunel was perhaps the greatest engineer there has ever been - his work on railways, tunnels, bridges, and ships helped make Victorian Britain the envy of the world.

The SS Great Britain was one of several great ships that Brunel built. It was the first great passenger liner and it was innovative in many ways. After a colourful commercial life, and a role in world war I, it was damaged and abandoned. Now however, it has been rescued and fully restored and you can go and visit it in Bristol and see it in all its glory.

The SS Great Britain
A poem for kids by Paul Perro

Once there was a builder
Named Isambard Brunel.
He built the beautiful Clifton bridge
And he built ships as well.

He built the world's biggest ship,
'Twas huge, a real heavyweight.
He gave the ship the name “Britain”
And everyone thought it was Great.

The Great Britain ship was proud.
She liked to brag and boast
“I'm the biggest ship in the world
And fastest coast to coast!

Old Brunel has built me well,
What a clever fella!
No other ship in the world
Has such a good propeller.”

She raced other ships across the ocean
And gave them all a thrashing
Everybody agreed
Great Britain was super smashing. 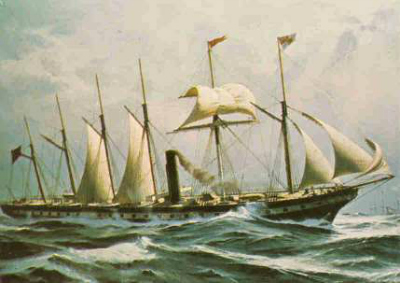 Super smashing Great Britain
(or SS Great Britain for short)
Was the fastest ship in the world
Nothing could stop her, she thought!

One day it was very foggy
And she couldn't find the land.
She searched and searched but ended up
Stuck fast, in some sand. 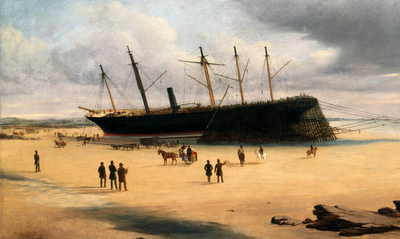 Britain had to be rescued
What embarrassment! What shame!
The rescuers were nice to her,
But she knew she was to blame.

After that she wasn’t boastful
She just got on with her work.
She wished she hadn't been big-headed
She felt like such a berk.

Wherever hard work needed doing
SS Great Britain was there.
Whatever problem she faced
She tackled it with flair.

She took families across the world
And carried soldiers to battle.
Sometimes she carried coal
Sometimes pigs and cattle.

After many years she felt weary
It was hard work being the best.
She parked herself at some islands
And settled down for a rest.

Eventually though, her friends in England
Heard she was worn out.
They crossed the ocean to bring her home
They all still loved her, no doubt.

Crowds gathered by the river
Waiting for her to appear.
When at last she came into sight
There was a mighty cheer.

As Britain chugged under Clifton bridge
She rang the old ship’s bell.
And everyone there thought for a minute
And remembered their old friend Brunel. 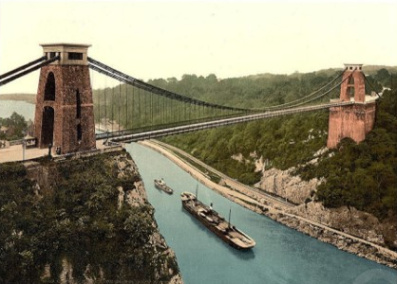 But that is not the end of the story
The end has not yet been written.
You can go to Bristol and see for yourself
The super smashing Great Britain.

Facts about the SS Great Britain

If you would like to find out more about the great ship, or plan a visit to see it, click here to go to the official site. 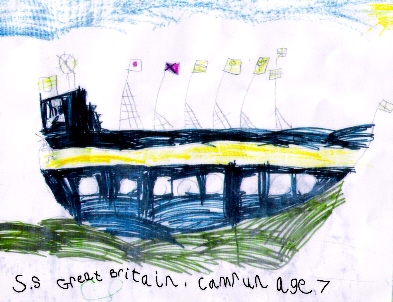