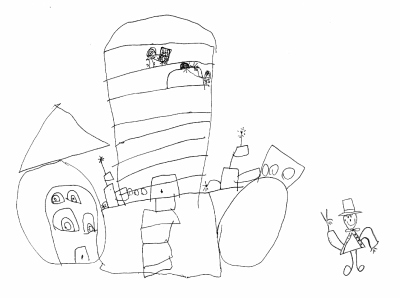 I took my daughter Jemima to Blenheim Palace, which is a huge stately home in Oxfordshire, England. It was the birthplace and home of the great Winston Churchill. We learned a lot about Churchill, and when we got home, Jem drew this picture.

It was actually the week before Churchill appeared in an episode of Dr Who. I think if this picture had been drawn a week later, there would have been a dalek in it!


Ed:
A descendant of the great military leader John Churchill (The first Duke of Marlborough) Winston Churchill was Prime Minister of Great Britain during World War II. Most people agree that it was Churchill's leadership that inspired Britain to stand alone against Adolf Hitler's Germany after the rest of Europe had fallen. He is thought of as a hero in Britain, one of the greatest men who ever lived.