We all know the story of King Canute don't we? The arrogant and foolish king who thought he could stop the tide from coming in? Well think again.

In fact, Canute (or Cnut) was a wise and good king. He had become fed up of his subjects acting as though he was all-powerful, so he arranged the stunt on the beach knowing he would fail, to prove to them that he was just a human like them.

After you have enjoyed this poem, please scroll down further to find out more about the old king.

There once was an old king called King Canute,
He was a kind old man, and wise to boot.
He was troubled though, he thought it was odd,
That his subjects treated him like a god.
One day a man said “You are a great king
Ruler of everyone and everything.”

King Canute looked at his subject and laughed.
He said “Not everything, don’t be daft.
I couldn’t command the wind not to blow,
I couldn’t command a tree not to grow.
I'm not in charge of the birds or the bees,
The sun or the moon, the skies or the seas.

Canute was now starting to get quite vexed
The subject just stood there looking perplexed.
The king called the servants together, then
He bellowed out an order to his men:
"Pick up my throne and take it to the beach,
There is a lesson that I want to teach.”

So they carried his throne down to the ocean
Followed by crowds, there was quite a commotion.
Canute sat on the throne facing the sea
And spoke to it with great authority.
“I am your king and I give this command -
Stay where you are, do not come on this sand”

But the sea didn’t listen to the king.
No-one can stop the tide from coming in.
As the waves kept advancing up the shore
The wise old king tried to halt them once more.
“I am the King, you must do as I say,
I command you to go back, right away.”

But the waves still came, right up to his feet.
Canute just shrugged and admitted defeat.
He faced the crowd, and he sternly outcried,
"Not even a king can control the tide.
I did my best, but no, I came up short.
I’m just not as powerful as you thought.” 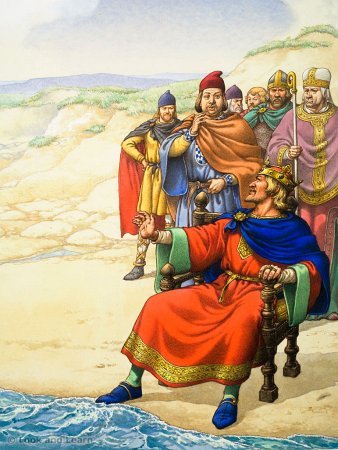 As mentioned above, the story is often misremembered for some reason, with Canute as a foolish king who believes he actually can stop the tide.  If you would prefer that version, click here.

Back to the Middle Ages