The Newcastle Christmas Tree Festival has been happening every year since 2009, taking place one Saturday in early December. Each year History-for-kids enters the competition. Find out more about it here, and there is an interview with one of the organizers, Lesley Dinning.

The 2016 festival is on Saturday 3rd December 2016, with viewing and voting from 11am to 4:30pm.  Then at 5:00pm there is carol singing surrounded by the trees.  The winning trees will be announced during the carol singing.

Decorate a tree as an individual, a group or a business, using any theme of your choice.

Open to all age groups.

Prizes for the best trees in the show - chosen by visitors to the festival! 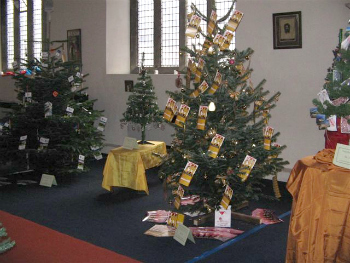 HfK: What is the festival all about?

LD: It's really just for fun - we decorate the church with lots of Christmas trees - each tree with its own theme. The church is open all day for people to come and have a look around. Some of the trees are pretty, others are really funny - there are some imaginitive people out there. Originally it was intended to be a one-off, but by popular demand, we have been doing it every year. People seem to love the idea, and love the display.

HfK: Where do the trees come from?

LD: From the local community - local shops, businesses, schools, hotels and individuals, all take part. We had 27 trees in the first year, but this year we are expecting about 40.

HfK: Does the festival raise any money?

LD: It does raise a little, which is used to help maintain the Church. Also, a collection in aid of Shelter is taken during the carol concert. Admission is free though, all donations are voluntary.

HfK: What sort of themed trees can people expect to see?

LD: In the past we have had "Diving into Christmas" by Jesmond Baths, "O Fishmas Tree" by The Fish Shop. This year we have some really great ones too - all top secret until the 3rd December though!

HfK: Thanks for talking to us. I hope it goes well. 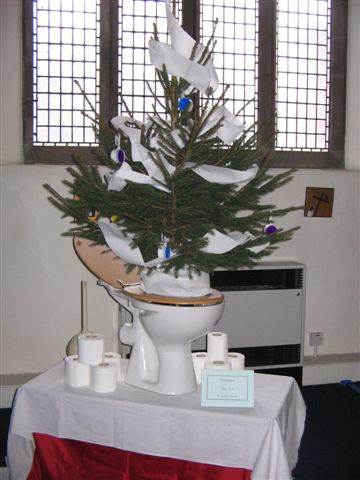 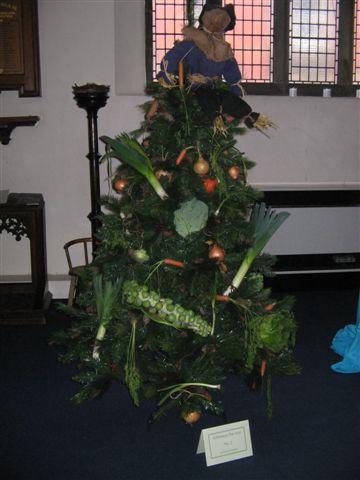 How to Find the
Newcastle Christmas Tree Festival

History of the Christmas Tree

Send us your Photos

If you have a photo of a great Christmas tree that you took at the Newcastle Christmas Tree Festival, then please send it to us, and we will share it with the world.

See More Photos of the Trees

This is the history-for-kids.com tree from the 2011 festival. It has a pirate puppet on the top instead of a fairy, and the decorations are poems and …

su·pine: Adjective. lying on the back or with the face upward

The Best of the 2013 Competition Not rated yet
to follow

The Best of the 2012 Festival Not rated yet
The winners of the group category were... 1st place Christmas Treduce Treuse Trecycle - Ecogroup West Jesmond Primary School 2nd place Aintree …

Toasting Christmas Not rated yet
This tree was very popular, and it was the 2011 runner up in the individual competition. Yes, it's toast. The base is a toaster.

Vestree Not rated yet
by The Clergy of St Hilda's Church

Last Christmas Not rated yet
As the winner of the Decorated Christmas Tree Festival at St. Hilda’s Church, Jesmond. I would like to tell about the events leading up to my success. …

Winter Warmers Not rated yet
From the 2010 Festival

If you are interested in entering a tree in the 2012 Newcastle Christmas Tree festival, you can contact us and we will pass your message on to the organizers.