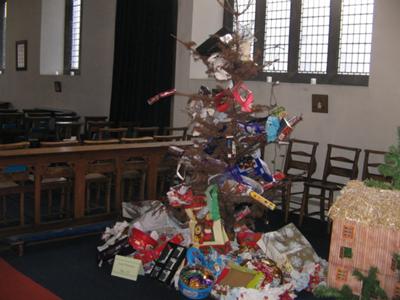 As the winner of the Decorated Christmas Tree Festival at St. Hilda’s Church, Jesmond. I would like to tell about the events leading up to my success.

I have been entering a tree in the festival since it began 3 years ago. My first entry ‘Allotment pan tree’ was voted in 2nd place. The second year wasn’t so good. I was however very pleased the public vote placed my tree in 1st place this year.

I planned my entry for 2011 from the previous year and gave it the title, 'Last Christmas'. I kept everything I could store from the previous year's Christmas, including a tree which I kept at the bottom of the garden for the entire year. As you can imagine the tree looked quite brown and bald a year later. It was perfect and just what was needed. My family had all been primed to keep empty packages, used gift wrap, pulled Christmas crackers, empty chocolate boxes, empty sherry bottle, even the turkey wrapper and cooking tray - in fact anything related to Christmas. I then stored it all in my garage and loft until the following December.

The day before the Festival, I turned up at the Church with my rather sad looking tree and bags full of rubbish. If you’ve ever transported a real Christmas tree from the garden centre by car, then you’ll know what a mess it makes - needles everywhere - try doing that with a year old tree! Hmmm!

I was given my allocated spot and after sweeping up all the needles I’d left behind me, I put the tree in place, onto a big plastic sheet, to catch all the needles. I was surprised there was still needles falling, it looked quite bald by now.
Then came the decorations, empty chocolate boxes, toy boxes, sherry bottle and all the other rubbish I’d saved throughout the year. I then scattered all the used scrunched up gift wrap underneath the tree.

I had even saved the turkey carcass, carefully washed and then wrapped in cling film, but alas it didn’t smell too good when I unwrapped it and so I regretfully had to abandon the idea. I didn’t think the parishioners would appreciate the delicate aroma.

The tree was decorated and I stood back to admire it. I liked what I saw. I did however get some funny looks from other exhibitors, all proudly adding finishing touches to their beautiful trees. I could almost hear their thoughts... it’s just a pile of rubbish on a dead tree and of course that’s exactly what it was.

On the day of the Festival the doors opened at 10:30am and the public came to view the trees and vote for their favourite. The standard was very high this year - 42 beautiful trees.. well perhaps they weren’t all beautiful, but some really clever ideas using a play on words, others kept it more traditional tree.

The winning trees were announced at the end of the day, during a Carol Service, surrounded by the trees. I was very pleased my tree won the public vote. The Festival was again a great success and a fun community event, as well as earning a little money for Church funds.

I wish to give my thanks and congratulations to the organisers and helpers behind the scenes of St. Hilda’s Church who deserve a pat on the back for putting on such a great event.

Join in and write your own page! It's easy to do. How? Simply click here to return to Invitation - Christmas Tree.