What the Romans did for us

"What the Romans did for us" is based on a poem by Jon Bratton.

It was inspired by a very funny scene in the movie "Life of Brian" where a group of bitter freedom fighters (called "The People's Front of Judea") angrily discuss the contribution of their Roman overlords.

When you have finished reading the poem, please scroll down a little further to find out more.

What the Romans did for us

Roman roads were long and straight
You would not need much steering.
They really were a triumph of
Ancient engineering.
Now, every schoolchild knows
About the Roman roads,
But Romans gave us so much more,
Yes, they invented loads.

Aqueducts – those big arched bridges
Which brought the water down
From the rivers in the hills
To the folk in town.

They gave us public libraries,
Great if you were a keen reader.
Before then books were hard to find -
There were no Kindles either.

The Romans built some public baths,
They built the sewers too.
Presumably, before they came,
The whole place smelled of poo!

They gave us apples, pears, and grapes,
Cabbages, turnips, carrots, peas.
Thanks to them we can now all eat
Our five-a-day with ease.

Glass for windows was another
Great invention of Rome’s.
And central heating too keeps us
Warm inside our homes.

They invented the calendar,
It’s just as well because
Without it you would never know
When your birthday was.

They gave us the police force and
Invented the street light.
Before then it was quite unsafe
To walk the streets at night.

In fashion, men wore the “toga” –
A big white woollen sheet;
It was draped from the shoulders to
The sandals on their feet.

So let’s give thanks, they left behind
So much when they had gone.
And let us give thanks also that
Wearing togas never caught on.

Facts about what the Romans Did 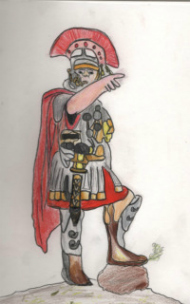