Paul Perro has taken Clement Moore's classic "Twas the Night Before Christmas" (or "A Visit from St Nicholas") and updated it, just a little. Archaic words have been replaced, and reference to St Nicholas has been replaced by Santa Claus. It is still however, the poem you remember and love.

Anyone who has ever tried to read the original poem to a six year old, and been asked what a sugar plum is, or what is meant by "the moon on the breast of the new-fallen snow", will appreciate that it is not really a poem for children. All we have done here, is replace the words and phrases that children will not recognize with words and phrases that they will.

Oh yes, and instead of an elf called St Nicholas dressed in fur and smoking a pipe, we have an old man called Santa Claus dressed in red and with no evidence of nicotine addiction.

That's it though. We have not added any car chases or aliens.

We know that not everyone will approve of the changes made, but don't worry, the original is still there, and will not be going away any time soon. This is just a little something to help mums and dads enjoy the poem with their little ones.

Twas the Night before Christmas

Twas the night before Christmas, and all through the house
Not a creature was stirring, not even a mouse.
The stockings were hung by the chimney with care,
In hopes that old Santa Claus soon would be there.

The children were sleeping all snug in their beds,
With sweet dreams of Christmas time filling their heads.
And mamma in her nightdress, and I in my cap,
Had just settled down for a long winter’s nap,
When out on the lawn there arose such a clatter,
I sprang from the bed to see what was the matter.

I went to the window - oh, what would I find?
I opened the curtains and threw up the blind.
The moon shining bright on the new-fallen snow
Lit up very clearly the scene down below.

And what to my wondering eyes should appear,
But a magical sleigh, pulled by magic reindeer.
When I saw it I was excited because
I knew that the driver must be Santa Claus.

As dry leaves that get caught in a gust of wind fly,
When they meet with an obstacle, climb to the sky.
So up to the house-top the reindeer they flew,
With the sleigh full of toys, and old Santa Claus too.

And then, in a twinkling, I heard on the roof
The prancing and pawing of each little hoof.
As I drew in my head, and was turning around,
Down the chimney old Santa Claus came with a bound.

He was dressed all in red, from his head to his foot,
And his clothes were all tarnished with ashes and soot.
A bundle of toys he had flung on his back,
And he looked like a traveller, just opening his pack. 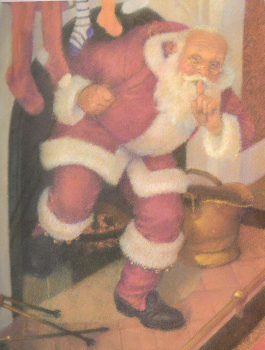 His eyes-how they twinkled! his dimples how merry!
His cheeks were like roses, his nose like a cherry!
His droll little mouth was drawn up like a bow,
And the beard of his chin was as white as the snow.
He had a broad face and a little round belly,
That shook when he laughed, like a bowlful of jelly!

He was chubby and plump, and I have to admit,
That I laughed when I saw him, I could not help it.
A wink of his eye and a twist of his head,
Soon gave me to know I had nothing to dread.

He spoke not a word, but went straight to his work,
And filled all the stockings, then turned with a jerk.
And laying his finger aside of his nose,
And giving a nod, up the chimney he rose!

He sprang to his sleigh, gave a whistle, and grinned,
And away his sleigh flew like a feather on the wind.
But I heard him exclaim, as he drove out of sight,
"Happy Christmas to all, and to all a good-night!" 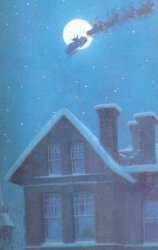